The Tea Party Debate is a truly historic, first-of-its-kind event that will bring conservative candidates for President together to discuss tea party principles, and determine which candidate has the best solutions to lead the United States of America and her people into greater freedom and prosperity. The debate demonstrates that the tea party, which began as a small grassroots movement, has grown tremendously in size and influence to become a powerful force in American politics. The Tea Party Debate will focus only on the core principles and values of the tea party movement: limited government, free markets, and fiscal responsibility. WHEN: September 12, 2011 WHERE: Tampa, Florida This date was chosen because it is such a significant day in the history of the tea party movement: the anniversary of the massive “March on D.C.” which demonstrated the power and size of the tea party.

Our expectation is that a strong front runner will emerge who clearly supports the principles and values of the tea party movement and who is the strongest constitutional conservative. We believe that the groups around the country will make the decision to support that strong tea party candidate and will work to take back the White House from President Obama.

The Tea Party Debate has tremendous significance because it is powered by engaged tea party activists. The Tea Party Debate will be coordinated by Tea Party Express and CNN, with participation and involvement from co-host local tea party groups in every state across the country. The questions asked of the candidates will all come from the tea party groups and their members – to ensure the debate is about the issues that matter most to the tea party movement. We want your local tea party to be a part of this historic event! For information about becoming a Tea Party debate co-sponsor, please send an e-mail to [email protected] 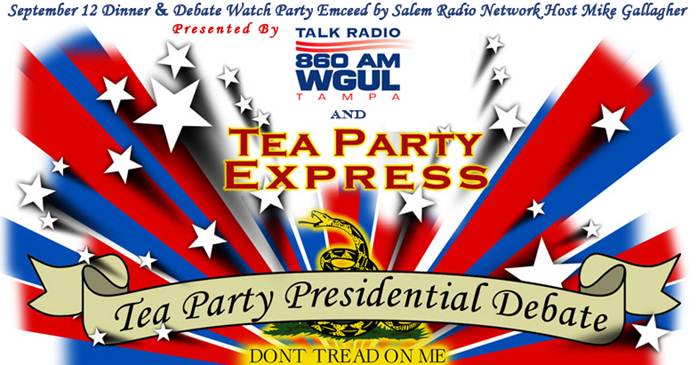 Be part of the historic CNN/Tea Party Express Republican Presidential Debate in Tampa, Florida, on Monday, September 12, 201. Make your voice heard on who should be the tea party supported candidate for President. The top eight Republican presidential candidates will be participating in the debate. Emceed by Salem Radio Network Host Mike Gallagher and presented by The Tea Party Express and Talk Radio 860 WGUL, be part of the festivities. The Debate Watching party will include dinner, entertainment and the chance to mingle with all of the participants at the presidential debate. Event Location: Florida State Fairgrounds inside the Special Events Center Building 4800 U.S. Hwy. 301 North – Tampa, FL (must enter via MLK, Jr. Blvd.)

The Tea Party Express came into existence as the tea party movement was awakened by the famous Rick Santelli rant that swept across the country in February of 2009. This power and influence could not be ignored by the political establishment as the grassroots movement exploded onto the scene. Now, after nine national bus tours and several regional tours that hosted over 500 rallies, the Tea Party Express has become nationally recognized for making a difference in critical elections.

© 2011 Tea Party Express.
All rights reserved.
PAID FOR BY TEA PARTY EXPRESS
NOT AUTHORIZED BY ANY CANDIDATE OR CANDIDATE’S COMMITTEE
WWW.TEAPARTYEXPRESS.ORG
Contributions are not deductible for income tax purposes. Corporate and foreign funds are not permissible.